Choose the best binocular for you with our basic guide

Below is a breakdown of what the numbers mean, different types of coatings, magnification power and the objective lens diameter

Things to consider when buying binoculars:

Once you have worked out what your budget is, what you value in a pair of binoculars and what you are going to be using them for, it's going to be easier to find a pair from our large collection.

What the numbers mean

Binoculars come in all shapes but they all have 2 numbers separated by an X. The first number is the magnification

The second number is the diameter of the objective lens

Light enters the binoculars through the objective lens, the size of the lens will determine the brightness of the image as well as the exit pupil rating, which is used to measure performance in low-light conditions.

The magnification (7) divided by the lens diameter (50) = a 14mm exit pupil diameter The higher the number, the brighter the image during low light viewing. If you are planning on doing low light, sunset observation, go for a 40mm + lens size.

Field of view determines how much you see, horizontally in clear conditions at 1000 yards (914 metres). More is better and not all binoculars are built equally in this respect. Manufacturers don't agree as to how to express this either on there specifications so if you wanted to work it out yourself, here are the formulas:

Just to show the relationship between magnification and FoV, if that binocular above was a 10x instead and the FoV was the same, the angle of view would remain 6.9-degrees, but the apparent angle would be pumped up to 69-degrees. 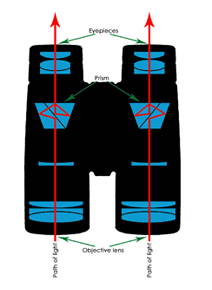 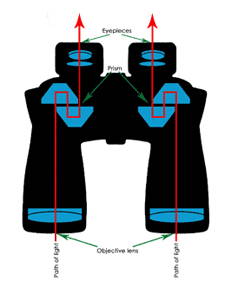 Classic design, eyepieces set closer together than the objective lenses.

When light passes through an uncoated glass lens a little of the light is reflected back outwards. In a binocular light will pass through several layers of air and glass before reaching your eye. In very old or cheap binoculars this results in an image that is 50% darker.

Quality binoculars manufacturers avoid this phenomenon through the application of specially formulated coatings. Top end binoculars will have multiple coat layers on every optical surface.

So what's right for me?

As a general rule everyone's eyes are different, therefore when possible we suggest you try before you buy.

Binoculars are a personal item. What is good for one person may not be good for another. We really suggest you get into contact with us if you have no experience with binoculars. There is no "best" pair.

For advice on what binocular is right for you visit us and talk to one of our highly trained staff or send us an email.